Since he first designed the popular M1 Mallet in 1963 from his small shop in San Antonio Texas, the name Ray Cook has become synonymous with quality putters. Inspired by the physics and aerodynamics classes he took while attending college in Spearfish, S.D. through the Air Force, Ray realized that slight vibrations in metal tuning forks provide more feel. As a result, he crafted the first aluminum putter with grooves. With this simple change, Ray Cook revolutionized the way that putters are manufactured to this day. Throughout the 60’s and up until the late 80’s, Ray Cook putters dominated both the PGA and LPGA tours.

It took a combination of luck and nerve to make Ray Cook’s putter dreams a reality. After he became a caddie at the Willow Brook Country Club in Tyler Texas at the age of 14, Ray Cook was not allowed to play on the course’s greens. He had to practice in the sand behind the pro shop and crafted his first putter that same year. It wasn’t until 1941, while stationed at the Army Air Corp base in Gardner Field California, that Ray took the first steps towards bringing his putting goals from the hidden shadows of the pro shop to the limelight of professional golf. That year, he read in the paper that Bob Hope, Babe Zaharias, and Bing Crosby were playing a charity golf game for servicemen. After hitchhiking to Bakersfield, Ray got to watch the stars in action. These were the type of players that Ray wanted – and needed – to use his clubs. Once Bob Hope had finished putting on the 18th green, Ray seized his opportunity. When Ray went up to shake Bob’s hand, he also handed the star one of his patented putters. The rest, as they say, is history. 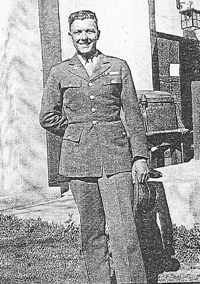 Between 1962 and 1964, both Bob Hope and Bing Crosby proudly carried Ray Cook putters in their golf bags. Famously, one night Bing called Ray and requested a putter like the one Bob Hope had been playing with because Bob had beat him their last match. A week after Ray scrambled to deliver the requested putter Bing’s tee time, Ray received a note from the star golfer simply saying, “Thanks Ray. I beat him.

This untarnished reputation for quality putting that has more than withstood the test of time is now back for 2012. “We’re excited to be able to create a brand new product line and once again offer the golfing community the highest quality putters at affordable pricing.” states Thomas Rath, CEO of Ray Cook Golf. “We are constantly looking to expand our product line and continue to offer the best products to our customers. By bringing Ray Cook back into the spotlight, today’s players can be a part of a legacy more than 50 years in the making.